Annie Sloan was born in Australia, but her parents moved to Great Britain which caused her to go to University where she was trained as a fine artist. After graduating she became an interior decorator and became well known for her paintings of murals in many of the finer homes in England.

Annie became well known by 1987 for the publishing of an extremely successful book entitled "The Complete Book of Decorative Paint Techniques" which is by now considered to be the authority on the subject.

With her background in fine arts, and the ability that comes with that knowledge in the mixing of paints, Annie developed her chalk paint due to a general dissatisfaction of what was then available.

It seemed that most paint brands were fraught with difficulty when it came to mixing the colors due to their makeup and terrible results when attempting to mix them for interior design purposes.

In 2000, Annie established a shop in Oxford, England which featured her new Chalk Paint and it was a big success. The name "Chalk Paint" was chosen because of the lovely, velvety matt finish that the paint creates when it dries.

The paint also can be applied to just about any surface without needing any elaborate steps prior to application. No sanding, priming or any other preparation is needed, except a clean surface. The paint goes on the surface very evenly and is a boon to do-it-yourself projects from re-finishing furniture to major paint jobs of rooms and entire interiors of homes.

This is the astounding story of how Annie Sloan Paint got its start, and as the brand continues to be sold in all the far corners of the world, still continues to grow in distribution channels and is a hit wherever it is discovered.

To date, Annie has been the proud author of over 25 books which sell internationally along with her paint. Annie's enthusiasm and her passion for painting in a decorative manner has transformed how people think when it comes to interior design. The Annie Sloan products are now available in over 40 countries around the world through her exclusively selected independent dealers whom she has labeled as "Stockists."

The story of the stockists alone is a fascinating tale, as not just anyone can become a stockist. As is the story of Janet Roewe Piller, a mother and avid decorator herself illustrates. Janet was looking for a way to come up with a way to get good quality result from her own efforts, but with some of the materials and paints locally available was coming up short.

She had heard about the Annie Sloan paint, so she tried to find some and much to her amazement there was none at all in the state of Iowa, where she lived. So she contacted Annie Sloan herself directly, after reading about her in a blog.

After discovering Janet's frustration in not having a source of Annie Sloan Chalk Paint anywhere near her Des Moines, Iowa location, Annie Suggested that she become a stockist, and the rest is history, as they say.

Janet wasted no time in opening her retail establishment in 2012 with her husband, Dan Pillar,  as well as gaining an online presence serving several adjoining states.

The story of Janet's and Dan's is typical of many of the Annie Sloan stockists, as they continue to serve communities around the world. As people find out about the Annie Sloan paint, the word spreads and more and more of the paint gets sold.

One of the major keys to the phenomenal growth is the workshops that are held on the local level, where people get together and share ideas in the use of the paint and its applications. Many friends are made as many projects are birthed and completed under the watchful eye of the stockist.

The saga of the development of the paint itself is quite a story as it has filled a need that many do-it-yourself decorators had, but were clearly not able to attain. Annie's goal initially was to create a decorative paint that went on literally every surface very easily without a lot of prep work.

At the time Annie was thinking about this revolutionary development, she had 3 young boys under the age of 7 years old, so she did not have the time to wait while prep work was done and drying let alone working with the various difficult and messy paint applications available.

She wants a paint that could be applied to any surface such as new and old wood, plastic metal, cement, bricks and any other surface desired. She also wanted something where she could mix the colors easily so that the final result was not muddy and dead, but could still deliver a vibrant color.

With her knowledge of her education and fine arts background, Annie was able to come up with the right formula and the results speak for themselves. The Annie Sloan paint can be used on just about anything, and the colors can be mixed very easily to come up with the 18th and 19th century shabby chic look that is so popular now. 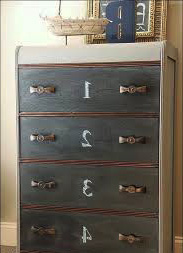 Annie's statement that now all the hard work of preparation, sanding and so forth can be skipped so we can now get right to the fun part, that of getting fast results for our efforts.

Obviously, Annie's ideas have caught on with millions of people world-wide as the popularity of Annie Sloan Chalk Paint is solidly set in stone as more and more people discover its versatility and ease of use. The accolades never cease as people try the products and participate in the workshops, they discover not only the charm of the paint, but by sharing first hand the whole experience in the workshops, they learn new ideas in decoration.

Annie Sloan's story is certainly a success story, but it is also about her passion and the love for what she has created. Her ability to translate those attributes completes the story as her passion and excitement continues to be transferred to all.