Annie Sloan has to be the success story of the century as she has taken a germ of an idea and turned it into a world-wide empire. Born in Australia, grew up the UK and graduated from University with a degree in fine arts.

Annie was a muralist for wealthy Brits as well as a successful interior designer, and she became frustrated with the paints available commercially, so she invented her own paint. Commercial paints were hard to mix and were largely unmanageable.

Annie's new paint was a success, and she called it "Chalk Paint" due to its nice and smooth matte finish. Soon her paint was in demand around her local area of Oxford. 20 years later, she has written 20 books on refurbishing furniture and refinishing furniture, and her stores, called "Stockists" are on nearly every continent of the world.

When Janet Roewe Pillar in Des Moines Iowa heard about the Annie Sloan Chalk paint she was intrigued, but she had no idea where she could buy Annie Sloan Chalk Paint. There was nothing available in Des Moines, and not even in Iowa, so the decided to call Oxford England, and speak to Annie Sloan personally. Annie told her that all of her paint is marketed through her stockists, and she suggested that Janet become a stockist.

This was a suggestion that Janet took her up on. Stockist positions are not just offered to everybody, but Annie looks for people who have backgrounds in interior design and related fields and Janet fit the mold.

Today, Janet is the successful owner of own stockist facility, where she holds workshops and is the focal point of Annie Sloan products in Iowa.

The paint itself is a remarkable tool as it can be literally painted onto just about any surface without having to sand or prime the surface. It dries to a very smooth matte finish and it is perfect for refinishing furniture, as it quickly dries and color matches very well. Mixing the paint is a breeze using Annie's techniques and instructions.

One key to the company's rapid growth is the workshops where customers can come and learn the techniques that made this company world-famous. This has been a major factor in connecting with customers and the spread of the chalk paint gospel.

Another factor is the genius behind the uses that the paint can be used for. The chalk paint is probably the most versatile decorating paint in the world, and that fact is not lost on all of the do-it-yourself crafters from Des Moines to Cape Town. 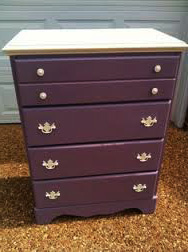 You can find out where to buy Annie Sloan Chalk Paint by going to Annie's website and then the customer can search by their location to find a stockist.

The stockist is where all the action is and there grows a loyalty and sort of a family relationship among the customers as they meet at workshops. Here they share their stories of their successes. This goes a long way in cementing the brand and spreading the word.