Annie Sloan is a real person in Oxford, England who was trained as a classical fine artist at university, became a well versed interior designer, and now is the inventor, and world-wide distributor of her famous chalk paint.
Today her paint is found on nearly every continent of the world, and her techniques are being extolled and taught through her retail locations, called “stockists” where classes are given along with the various techniques in applying the paint.
The paint itself is quite remarkable in that there is no stripping, sanding or primers needed to apply this paint, as it can be used on just about any surface. Another great feature is the ease in which the colors can be mixed and matched. Most commercial paints doen’ mix too well, so with her background in fine arts, where the artist will always mix the paints, Annie came up with the formula to make her paint easy to mix colors.
In 2011 a lady named Janet Piller in Des Moines, Iowa was looking for a way to easily create a Shabby Chic furniture result. She had been reading in a blog about this new kind of paint where no stripping, sanding or priming was needed, and she was sure interested in that.
She ended up emailing Annie Sloan herself, and one thing led to another and Janet became the first stockist in Iowa for Annie Sloan. Since then the Annie Sloan Chalk Paint Des Moines Branch has become a fixture in the area. 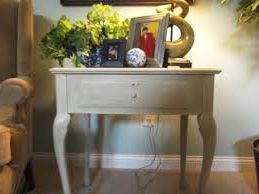 See Also : The Birth of Annie Sloan Paint Des Moines
The first exposure that the Des Moines area had to the Annie Sloan Chalk Paint was at a booth that Janet set up at the Des Moines Brass Armadillo Antique Mall, along with a Facebook Page and a Blog. The first time exposure was a hit, and word began to spread to the point where Janet had to get a permanent place to show off the paint, sell it, and have enough space for workshops and such.
Annie Sloan Chalk Paint has literally become a world-wide phenomenon and Janet with her Annie Sloan Chalk Paint Des Moines Branch has become a force for the company in Iowa. There is no other Annie Sloan stockist within at leat 100 miles of Des Moines, so once word got around the area, the Des Moines store got quite busy.
And word does get around. It would amaze most people to know how many folks like to refinish, repaint and just redo rooms, houses, furniture, and items of all types. The Annie Sloan Chalk Paint leaves a wonderful flat finish that is great for just about any surface, and it can be touched off when the paint dries with the Annie Sloan soft wax to give the surface that professional sheen that makes it so beautiful.
Now with many workshops and presentations behind her, Janet is the go-to girl for Annie Sloan chalk-paint and the future looks very bright as more people are learning about how easy it is to work with the paint and the results that it brings.

Coleen Edanur Bourquin
I live in London, UK. I am a blogger and Home Designer, Welcome to my Blog Home Depot Chalk Paint